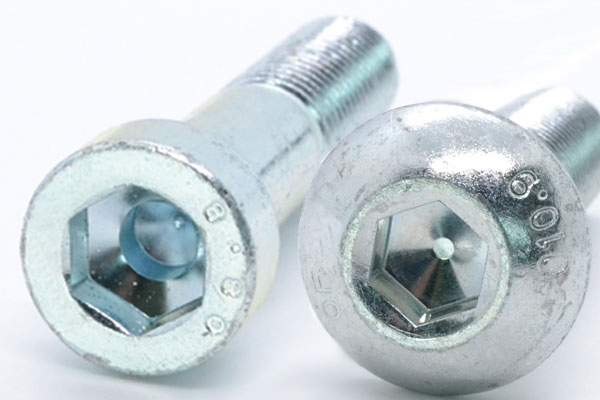 Socket screws (also referred to as Allen screws by the name of their inventor) appeared more than 100 years and since then they have been developed with different head types and shapes, always maintaining a relevant role in the fastening market due to their handiness and reliability.
Indeed, socket screws are provided with a hexagon recessed head which enables easy assemblies where there is not sufficient clearance for fastening tools.

They are inserted and fastened into the metal parts, without any wrench or socket wrench, through hex key, available in different sizes according the recessed socket, that requires less space to work.
Furthermore, the shape of the head inhibits the key to get out their recess during tightening. That allows to apply an increased tightening torque while avoiding the risk that surrounding surfaces can be damaged.

Socket screws are largely used in different applications such as automotive industry, machine tools, and earth moving.
Getting in touch with our qualified team is the best way to be leaded in the choice of the best solutions for every kind of application.

Looking the head shape, socket screws can be classified in:

Socket head cap screws are featured by a cylindrical head and a hexagonal drive hole that enables them to be driven where there is not sufficient space for wrenches or sockets.

Hexagon socket Countersunk Head Screws feature a flat top surface and a countersunk underside which allows them to sit flush with their bearing surface.
Socket countersunk head screws require a pre-drilled countersunk recess to be fastened in position.
DIN 7991 is the reference standard for this type of socket screws.

Unlike socket countersunk head screws, socket button head screws are generally used where the components being fastened are too thin for a countersink but a smooth surface appearance is required.
They are characterized by a low-profile domed head with a larger diameter.
ISO 7380 is the international reference standard for this type of socket screws.

Shoulder screws are a type of socket screw featured by an unthreaded shoulder, below the head of the screw, which is larger in diameter than the underneath thread. Shoulder screws are largely used as a precision spacer and bearing surface for a wide variety of applications. For example, they act as shafts or dowels for rotating items, axles for rolling parts, or guides for sliding elements.
Unthreaded shoulders are precision machined with exacting tolerances making them ideal for high accuracy applications.
ISO 7379 is the international reference standard for shoulder screws.

Socket set screws are a headless fully-threaded type of screw with an internal hex recess that it can be driven by an Allen Wrench. They are used in a tapped hole and tightened to secure an exterior object within or against another object by means of the friction. In practice socket set screws exert a pressure at the tip to keep the correspondent object locked in place. In common applications socket set screws are used to secure a pulley or a gear against a shaft in order to prevent that one from moving.
Socket set screws are generally used when fasteners have to fit below the contact surface, in order to provide a flat surface to applications.
This type of screws is available in various sizes and provided by different point styles, with unique properties, that engineers can take advantage of.

Cup point is the most common type of socket set screw, designed for soft and hard surfaces.
His thin-edged point digs into the contact surface providing a superior resistance to wear while maintaining a strong grip. ISO 4029 / DIN 916 are the international reference standards for these type of screws.

Featured by a flat tip, flat point socket set screws are convenient when is necessary to fasten soft metal or plastic parts without damaging their surface. They are also the desired choice where frequent re-settings are necessary. ISO 4026 / DIN 913 are their international reference standards.

Cone point set screws feature a sharp cone-pointed end which generate the highest torsional and axial holding power of all other set screws styles. They are most often used for permanent connections, even though they can work as pivot or hanger as well. They are manufactured in accordance with ISO 4027 / DIN 914 international standards.

Socket set screws with dog point are characterized by a protruding flat tip that fits into a matching hole in the component being secured, thus acting as a dowel pin. They are designed for permanent settings. This type of socket screws are manufactured in compliance with the ISO 4028 / DIN 915 international standards.