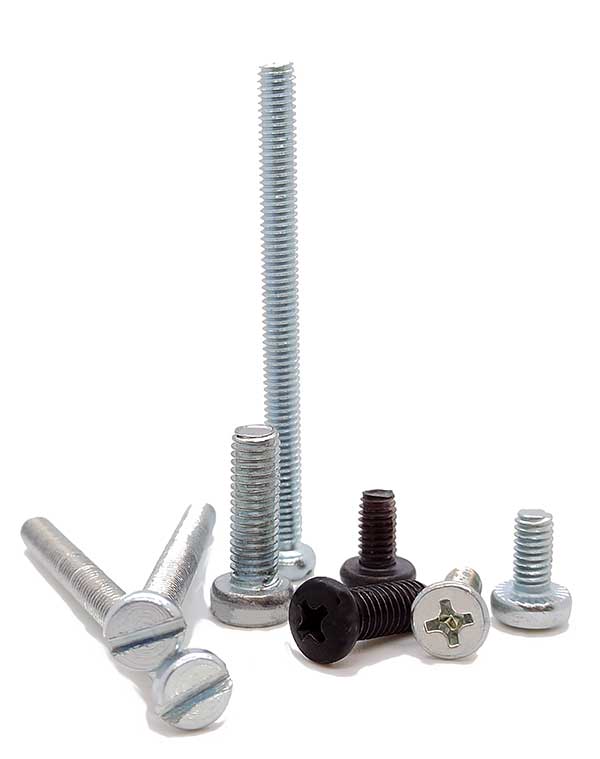 Machine screws are a smaller type of screw, threaded along the entire length of their shank. They are designed to engage with already threaded nuts or threaded holes and are largely employed to fasten metal parts together in all types of machines and industrial manufacturing equipment.

Differently other kind of screws, machine screws have mainly a metric thread. That because, unlike sheet metal screws for example, machine screws are not intended to cut their own thread in the metal surface where they are fastened into.
In addition to that, the most part of machine screws has two types of thread, the coarse thread and the fine thread.
In Vipa machine screws are available in a wide array of configurations, materials, drive types, head shapes and sizes. When choosing a screw instead of another one, is highly advised to consider the application of the screw and to make sure that this matches the type of screw is being bought.
Our team of consultant are available to give customers all the information about our products while leading them to choose the best solutions that fit their exigencies.
Even though machine screws are primarily manufactured in low tensile steel, other materials such as brass and stainless steel are available.
Machine screws are generally provided with two different drive types, slotted and Phillips, while about head shapes, the most common are: countersunk flat head, pan head, countersunk raised head, half round head, and truss head.

Countersunk flat head screws are a type of machine screw that consist of a flat top surface and a cone shaped surface under the head. They are largely used in all application where a good-looking finishing is required because of the countersunk that enables these machine screws to flush under the bearing surface.
ISO 7046 is the international reference standard for this type of screw.

Pan heads screws (also referred to as cheese head machine screws) are machine screws with a flat head on top and rounded on the sides. They cannot flush under the material they are driven into and come with either a slotted head or Phillips head. ISO 7045 or ISO 1207 are the international standards for this type of screws.

Half round head screws

Half round head screws are a type of machine screw characterized by a slightly rounded top surface and a flat underside, beneath the head.

Truss head screws are featured by an extra wide head with a slightly rounded top surface and a flat surface under the head.
This kind of screws are suited to fasten metal parts or sheet metals with larger holes, due to their shape.

This kind of machine screws are featured by a large and slightly rounded head. They are largely used to fasten portholes and plexiglass panels inside boats.